The infinitely talented Nicholas French made these videos on his Nintendo DS while Mikey and I blended and blooped on Sunday.

I'll be doing some more blooping tomorrow at The Arthive in Newcastle. Along for the drunken ride will be my buddies Polyfox and birthday boy, Cock Safari. Show is at 2:30pm, entry by donation.
No comments:

Kerry is having a few peeps playing at his place on Friday and I happen to be up in Newcastle visiting my mum, so I'm going to play too.

BARE GRILLZ - New Newcastle band featuring a great guy called Rob and two other guys. I harshed on someone describing them as a "noise band", so they think I hate them. I was more so paying out the uselessness of the descriptor "noise band". Well, apparently they sound like Abe Vigoda.

REUNION SACRED IBIS - I'm going to play tekkers noise and I assume everyone except Mycle and Senger are gonna walk out.

After this Royal Headache, Dead Farmers, Bed Wettin' Bad Boys and some other fella are playing up the road. Should be sick.
No comments:

On Wednesday the 9th of June, Stutter plays host to some goofballs who like making bloops and bleeps. Will upload the dodgy flyer if I can be bothered later. 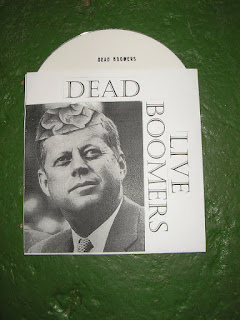 Two bullshit heavy live bootlegs from Dead Boomers shows in '09. The first shows them in full chain draggin' mode at Horse Bazaar, the second is their ear-splitter w/ Lloyd Honeybrook from What Is Music? at the Old Bar. If you have ever beheld these guys live, you know what to expect. CD-R's are $4 from me or a couple of bucks more from Missing Link and Sunshine + Grease. This is the first release from my (literally) full hard-drive of bootlegs. More soon.
1 comment: 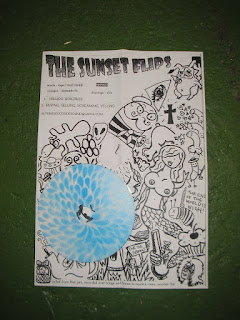 The Sunset Flips is me and Mycle being morons together and recording it. All future releases will be wrestling themed, starting with the NEW JACK tape out on Grog Pappy soon (maybe). I made ten or so copies made of this for our buddies. These two-trax are from our first jam and it's kinda obvious. Download at yer own risk.

My dad played guitar in a punk/blues band in the 80's called The Deadbeats. This is a ripping cover they did of the traditional Black (Is The Colour Of My True Love's Hair) culled from a 1982 live set at Norths Leaugues Club in Newcastle. It's much more Throb than Patty Waters (both of whom recorded ruling versions of the song). He did a punk zine called Zoned in this period, as well as contributing to another called Colostomy. I'm going to photocopy some ish's of these soon if anyone is interested.