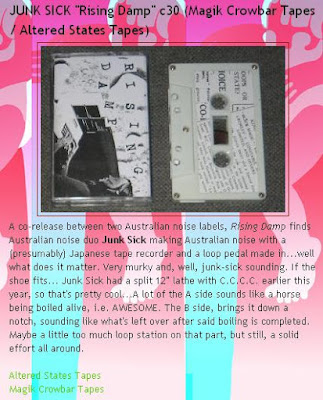 On something called Cassette Gods.
No comments: 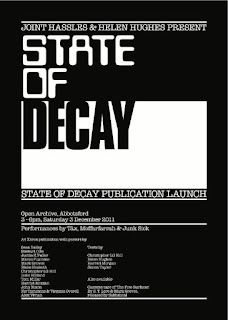 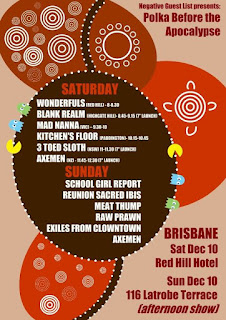 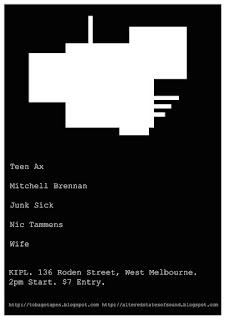 This is probably the launch for the 'Rising Damp' tape by Junk Sick on Altered States / Magik Crowbar.

Please note: This show will run on time so not to clash with the Pimmon show at Tape Projects later on Saturday evening.
No comments: 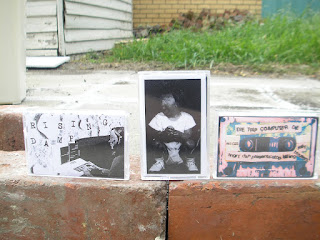 Altered States is proud to plop out this latest steaming opus by the now-defunct, absurdist trio, Die Trip Computer Die. Made up of men who were at one stage or another involved in UK post-punk unit The Homosexuals, DTCD utilise various instruments, circuit-bent equipment and plundered sample loops to achieve lift-off. Most importantly they use their (collective) MIND in order to crumble YOURS. Angry Dan Presents: Stop Killing Jelly Trousers was recorded live in Pontins, Nijmegan during a holiday in 2002 with the verbal verbosity of au pair, Angry Dan mastering ceremonies. However, this recording information may be merely another red herring left in your letterbox by the Trippers. ADP: SKJT is a twice a year listen, but when you do bring yourself to press play, it'll tie your laces and poach your eggs. 60 copies, pro tapes, cover + insert by Myjyerljcle Stevrdjnen Lesteechskinz.

The ‘Boys got together one summer at camp, bonding over harsh noise and bad taste. D’ya think they spent their stay riding the flying fox and toasting marshmallows? Not likely, mate. They decided to put their boy scout ingenuity to good use by making several sacks’ worth of loops and synth combustion. For true camp-site creepers only. 40 copies. Split release w/ Magik Crowbar.
No comments:

Polka Before The Apocalypse

Label showcase will be held in Brisbane town Dec 10 & 11. Venue is still undetermined for the 10th; please get in touch if you can help out. The two day event will feature such fine acts as AXEMEN, MAD NANA, 3 TOED SLOTH, KITCHEN'S FLOOR, BLANK REALM, XNOBBQX, EXILES FROM CLOWNTOWN, MEAT THUMP, WONDERFULS, REUNION SACRED IBIS & MORE, bands & artists who have our utmost support. It is sure to be the most fun you will have that weekend. AXEMEN will be selling shirts & have a grip of Siltbreeze vinyl for sale, dig the pic above for a visual reference. Surely I don't need to tell you that 'Three Virgins' is an essential purchase for any casual goober or refined record-eater?!
No comments:

RSI - 2XLYF Review in The Wire. 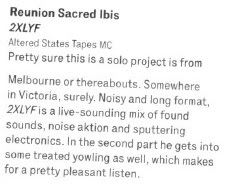 Thanks to music blogger Sean Prescott for these reviews, even if he did get his patch leads a lil' crossed with the PFM cd-r. Check it here.
3 comments:

Thanks to old mate Screwtape:

Cooper of AS warns that the sound level is somewhat low on this cut, particularly on the first part of side one, and also issues a free download of wave and mp3 files for this material, but interestingly I found the sound quite acceptable and, in fact when compared to the wave files, somewhat more enjoyable. The lathe cut seems to have added a kind of low fidelity grit to both sides which seems to enhance the actual pleasure of the music. This is particularly the case with Junk Sick - Cooper and long-time collaborator Tommy Gunja - who have created two messy, crude spirals of home-taped Noise that manage, with the first piece "Space Debris" to maintain a nice experimental feel with analogue synths, effects, tapes and contact microphones that features a lot of water-ish gurgling with spurts of static, underlined with synth humming and oscillating. The track features choppy bits of harsh sound over more rushing, dirtier layers that combine well and keep things moving without spazzing around. A fairly appropriately titled track, actually, invoking the idea of pieces of human-made shit clogging up space. "Black Dust" reminds me more of the kind of cassette improvisations put out by these people before, a rustier and more coagulated sound that gets more active and aggressive with a lot of nice dragging sounds and more intense synth. Both these pieces are great and I look forward to the up-coming "Rising Damp" tape.

The Hasegawa party, for their part, start off with the usual slow building cosmic synth tones that mutate and evolve with more stressed sounding electronics, like something being stretched beyond its limits, and these sounds move together, the slow winding synth and burbling and gurgling electronics, building in intensity but maintaining dignity. Funnily, because of the building tension of "Apocalyptic Birdsong" it seems to be too short, despite being over sixteen minutes in length, but this project always did seem to excel in the spaced-out-jam method, rather than the concise hit. Still, the sound presented here is structured and strong and the download version can bring out details the lathe cut perhaps missed.

Still a few copies left unaccounted for, but probably not for long. Hiroshi will have copies soon
No comments: 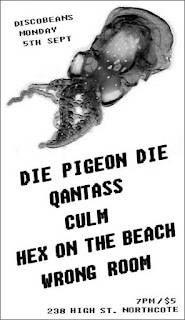 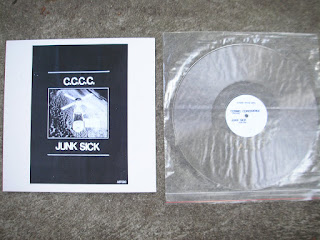 Cosmic Coincidence is the moniker under which Hiroshi Hasegawa has recently reformed his essential unit, C.C.C.C. They should need no introduction as one of the best harsh noise groups of all-time. Their late 80’s/early 90’s releases range from industrial to their later trademark psychedelic noise. ‘Apocalyptic Birdsong’ falls into the latter category and takes the sound to its astral conclusion. These are the first new C.C.C.C. studio recordings to be released in more than a decade.

NB: due to being lathe-cuts, the record must be played LOUD for intended effect.
All copies come with access to download the tracks.
2 comments:

Lazy Sunday afternoon show at Round and Round record store, featuring:

Labels: CULM, DICK THREATS, FREE, ROUND AND ROUND, TIM COSTER 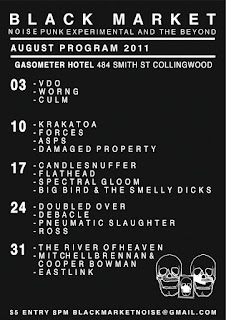 I'm organising the one tomorrow night. After heaps of hassles, the lineup is: 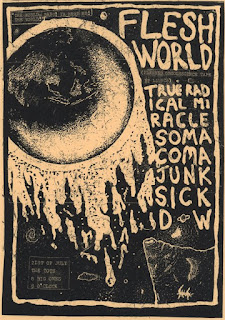 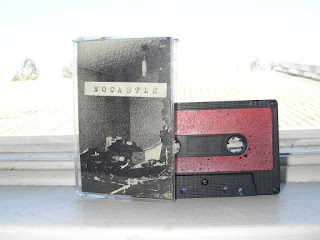 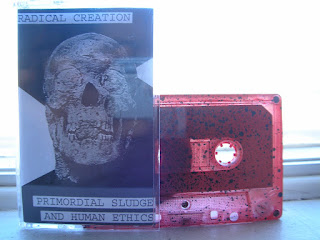 Blunt trauma induced by way of blown out mini-synths, tapes and maybe some contact mic’d junk. 40 on recycled tapes.
2 comments: 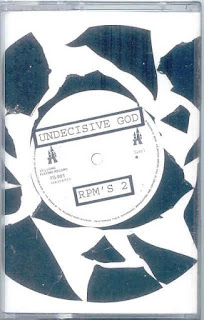 Undecisive God is the long-running project of Melbourne experimental music archivist and experimenter in his own right, Clinton Green. Originally working in the field of guitar-based drone and experimentation, UG has focused on the limits of turntable manipulation and abuse over recent years. RPM's 2 continues the series started on the recent split cassette w/ harsh noise monger, Screwtape. Available now from me or Clinton.
No comments: 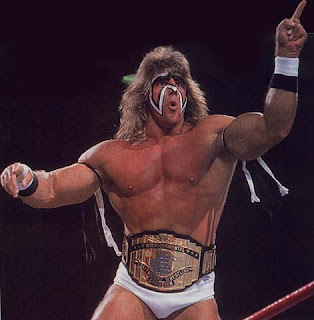 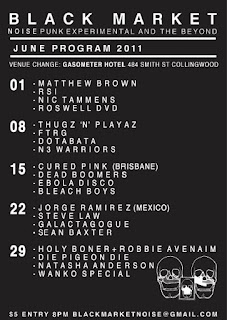 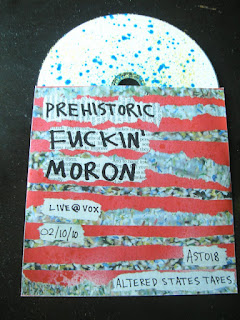 Live recording from the "Sound No Sound" shows during TINA last year. This is one of the best sets I've ever seen from the Moron. Synth, guitar, drums, tapes and a good amount of yelling combine into one mind-fuckin' freakout. $5, free postage in Asstralia. Prehistoric Moron tape coming sometime...
No comments: 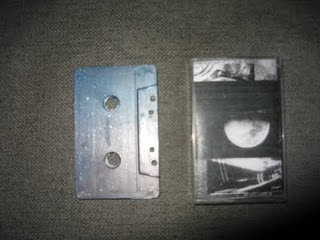 There's a recording of one of the first few Reunion Sacred Ibis shows on this comp. Also features Psychward, Military Position, Murgh'tr, TSS and Mitchell Brennanas. Basically, it serves as a snapshot of some of the excellent noise shit going on in Melbourne at the moment. Available from Magik Crowbar.
No comments: 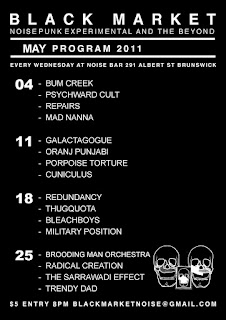 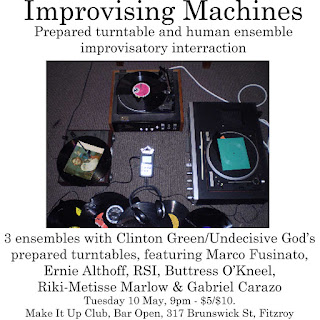 May 10th at Make It Up Club

Three ensembles based around Clinton Green/Undecisive God's turntable set up.

The first Sunset Flips (Cock Safari + Reunion Sacred Ibis) show is at the Croatian Club on the 20th of April. Something called Rainbow Ride is playing too.

This is also happening on Easter Sunday: 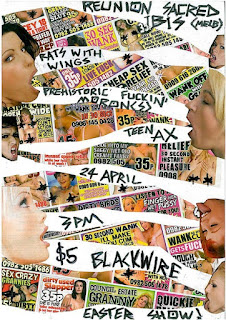 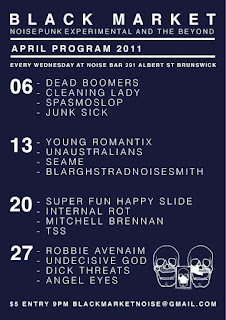 A new weekly night of noise and punk curated by Bryce Sweatman (Pathetic Human, Chrome Dome) at Noise Bar in Brunswick. Psychward Vs. RSI are playing under new name Junk Sick at the first one with some other ripping dudes.
No comments: 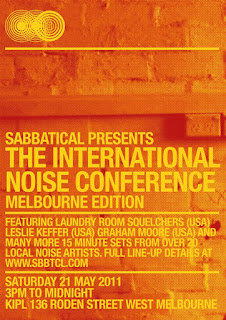 Since 2004 Rat Bastards INC festival in Miami has become an institution for the USA noise underground. It's no laptop / no droning / no money / no bullshit / 15 minute sets approach and levels of inclusion has set it apart from any normal noise festival to become the most invigorating 3 days on the USA festival calendar. In recent times Rat has been taking the concept on the road and this year Australia gets its first taste in Sydney on the 20th of May and Melbourne on the 21st. 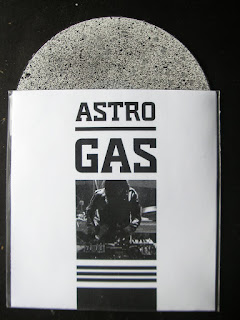 Late last year I was lucky enough to catch an ear-blistering set by long-running noise lord Hiroshi Hasegawa at local watering hole The Gasometer. Hasegawa was a member of legendary group C.C.C.C. before adopting the Astro moniker and taking his path of sonic destruction into space. This close to forty-minute long set is one of the best examples of pure Noise I’ve ever had the chance to encounter. The show was no chinstroke seminar either; between the blasts of electronics, you can hear stoked shouts emanating from several members of Melbourne’s noise cognoscenti. 50 copies on sprayed CD-R’s, cover by Mark Groves.
No comments: 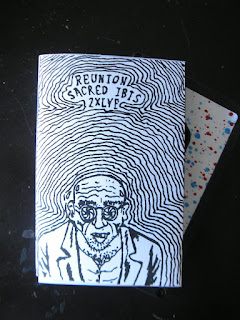 This here is a one-sided recycled tape with 20 minutes of live Reunion Sacred Ibis. The first set is from the Barkly St. backyard. Rain was dripping on my mixer, so I had to cut it short. The second is from Ovens St. Warehouse and sounds pretty fuk'n sweet really, not sure how that happened. I think it was the only time I've played that I haven't been high, go figure... 40 copies.
No comments:

THE FUTURIANS - "SOME ASSEMBLY REQUIRED" C21. 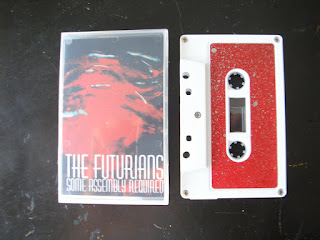 The Futurians are a punk band from New Zealand who deal in sci-fi influenced psychedelics. Some Assembly Required compiles five tracks previously released in very limited runs on lathes and CD-R's in the last few years. 50 copies on pro-dubbed tapes. Listen to one of the tracks here.
No comments:

Full Fucking Moon are psychedelic space cadets from NZ, feat. Torben Tilly of Minit/Garbage & The Flowers infame. Prehistoric Fuckin' Moron brings his mind-altering freakout to Melbourne from Sydney/another galaxy. Javier Frisco from Perth washes in with waves of drone. Reunion Sacred Ibis builds up a cacophony of sound with layers of Nintendo DS and tape piss. Mad Nanna crafts messy poppy with an ill-bent and a good heart. 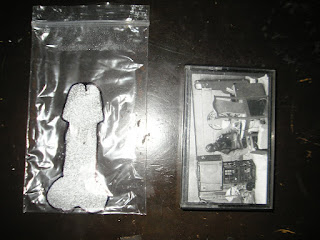 Cock Safari is one of the best things going at the moment, no shit. This has three cuts from two of the best places in Newcastle (Vox Cyclops and the Croatian Club). Side A is one of the best sets I've heard from the Cock, you can watch a clip of it here. The B-side features a dense hiss track that sounds like it SHOULD be on cassette, as well as an excerpt from a harsher vibed show that possibly involved Mycle bashing a guitar about. 50 copies on recycled tapes.
No comments: 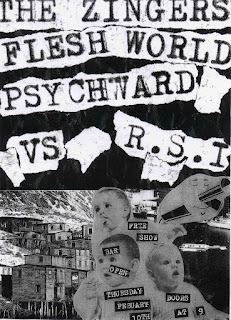 Psychward Vs. RSI are playing a free show with some REAL bands that play REAL music at Bar Open. 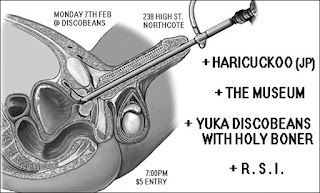 The first in a monthly gig series at the excellent Discobeans Japenese restaurant/gallery on High St.
No comments: 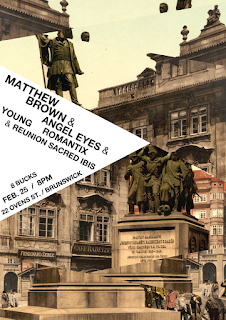 Andrew Mcintosh did a review of the RSI / Mitchell Brennan split here and Tim Scott reviewed the Pissbolt and Lakes live tapes here.
No comments:

This shit is kinda dubious but, due to the ass-suckery of myspace these days, I opted to make a Soundcloud for Reunion Sacred Ibis stuff / Altered States releases. You can find it HERE.
No comments: 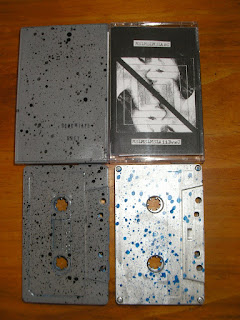 Three harsh spirals dating from 2009. The source material is heavily treated vocals, however they end up sounding like something ultimately more depraved.


Both are in an edition of 40 on recycled tapes.
No comments: