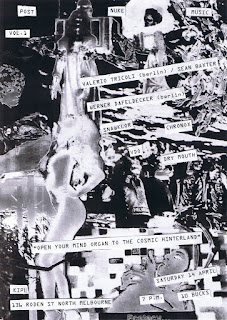 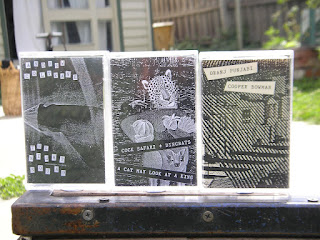 Detroit’s Andrew Coltrane has been thumping out stellar sound for a coupla decades now, spread over releases on his own Hermitage label as well as a grip of the usual seppo suspects (Fag Tapes, American Tapes, Middle James Co). Following on from his recent ball-tearer of an LP on Trilogy Tapes, AC delivers a pounding slab o’ tape mannip and blistered electronics recorded straight to four-track sometime in 2010. Straight from Michigan’s smoke stacks to your skull! 60 copies.

This here’s a fried lil’ collab between Cock Safari (Mycle Treeeskinz) and Dingbats (Kane Ewin) recorded at Newcastle’s premier pharmaceutical dispensary / venue / flophouse. There isn’t much point trying to describe these sounds, ya just need to chuck your green goggles on and immerse yourself. One thing I will say is that if you dig on loops, this is the crepe for you. I had a bunch of c90’s lying around, so half the tape is taken up with whatever crap was on the end of the master I was given, sounds like local radio, whoo. 40 copies.

This is a split between two bros from Melbourne who dig on smokin’ doobs and jamming similar sounds. The kind of noise that emanates from Oranj Punjabi (Fjorn Butler) is some of the most interesting to leak outta the overcrowded Australian swimming hole in recent years. Fj’s side is four tracks of densely layered tape clatter, calling to mind bleakened atmospheres. I am really stoked on this one. My side is three tracks recorded one arvo in my loungeroom using looped tapes, Nintendo synth n' contact mics. 60 copies.
No comments: 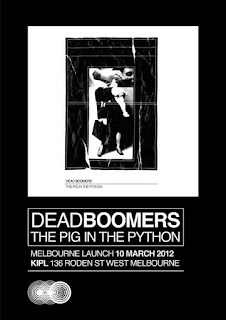