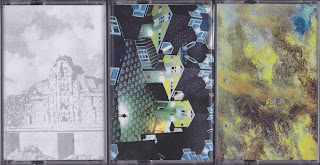 I feel like I’ve been sitting on this release for an eternity. SCLR = sounds created by Tarquin Manek, member of Bum Creek and numerous other entities. Static Cleaner sees Manek using similar tools as he would under Thug Quota (another of his solo projects), here the gtr/drum/clarinet/whatever else forges lo-fried psych. Looped hallucinations in the vein of Lamborghini Crystal, but wholly unique.

Unwar is a relatively recent guise cultivated by Michael Donelley, curator of the MYMWLY / Hashram collectives and grand dragoon in rituals including 6majik9, Sun Of The Seventh Sister, No Guru, et al. None of this is especially relevant to Unwar though, as the order here is synthesiser music from eras past, albeit firmly planted in the present. I’d describe Sleep Dope as kosmiche if the word didn’t reek of record-collector semen. Sections of ecstatic alignment are bookended by slightly more concealed glimmers. A long stretch of space to get lost in.

Orinokoflo was a short-lived Melbourne trio made up of Sam Kenna (Radio CaCa, Castings), Mark Leacy (Cistern Corrupt, Castings) and Cooper Bowman (Flat Fix, Junk Sick). The point being made here was druggy, beat-driven weirdness. The halfway point between Idea Fire Company and Hieroglyphic Being? Maybe not. But the names dropped give you some indication of what was being attempted. Following one of the four shows that we played, someone labelled us “electronic free jazz”. That’ll do. This is Orinokoflo’s first release proper and probably the last.
No comments: 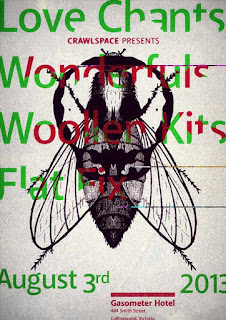