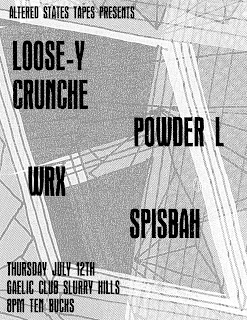 Also one half of WDK, Laura Hunt produces noisy dance brain-hacks via improvisation.

Modded, lowered and reeking of kerosene fumes, Dizzy gets behind the wheel for a few laps of boot-rattling deep house and techno.

From the docks to the big smoke, Spisbah (aka Oil) will envelope you in a puddle of molasses-thick ambient effluent.
No comments:

Mix Up On Nice Music Mixcloud. 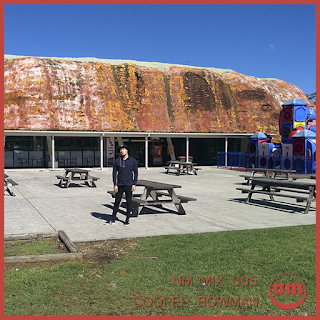 Sparks - Something For The Girl With Everything (Live, 1974 / Introduced by Keith Moon)
Steve Miller Band - Threshold / Jet-Airliner
Karen Marks - You Bring These Things
The Moffs - Another Day In The Sun
Spectrum - I'll Be Gone
Spectral Display - It Takes A Muscle To Fall In Love
Shoes - Tomorrow Night
Australian Crawl - Downhearted (1982 7" Version)
Stevie Nicks - 24 Karat Gold (Unreleased Demo Version)
Creedence Clearwater Revival - Effigy
Roxy Music - Take A Chance With Me
This Mortal Coil - You And Your Sister


"One man's treasure is everyone else's trash".

Indulge my bullshit for a second: yes, I love techno and ambient as much as the next soundcloud DJ, but I also grew up listening to punk, radio rock and every other kind of weirdness I could access via Limewire. I don't really listen to mixes regularly and personally find the whole approach as a dominant way of ingesting music slightly strange. The last mix I listened to more than once was Molly Water's Sanpo Disco one. I refuse to classify these tracks as 'guilty pleasures'. They are just songs that I genuinely enjoy and listen to regularly without any trace of irony. I would have also included 'Klepto Rackz', but I feel that this would be pushing it and people would maybe not believe me (although I do encourage you listen to it). If anyone is interested in a NWOBH or Memphis rap mix, I'd be more than happy to chop you out those as well.

Move to trash and empty the recycle bin on this one.