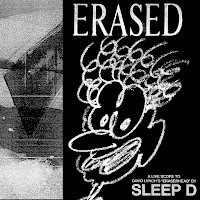 Here is a special, standalone release preceding the next upcoming batch courtesy of Frankston’s favourite sons, Sleep D. Maryos Syawish and Corey Kikos have been busy carving out their own sound and, in turn, an entire scene essentially via their Butter Sessions label, parties and live / DJ sets in Melbourne.

Erased is a soundtrack the duo were commissioned to play live accompanying David Lynch’s Eraserhead for the Cult Cinema pop-up series, Hear My Eyes last year. Listening to their soundtrack, even divorced from the film’s surreal visuals, successfully channels the same kind of unsettling dread and dark irreverence that has made Eraserhead such an enduring production.

While most would be more acclimatised to Kikos and Syawish’s floor-ready 4/4 productions and drifting ambient collabs with Albrecht La’Brooy, Erased sees them utilising their technical versatility to create a much more unsettling atmosphere. There are rhythmic moments, but this is otherwise a largely different Sleep D to the one you think you know. Obviously, it is fitting that these be committed to tape for Altered States.