AST100 12" Compilation Review in February's Issue of The Wire.

Here is the opening track from the always excellent Opal Beau: 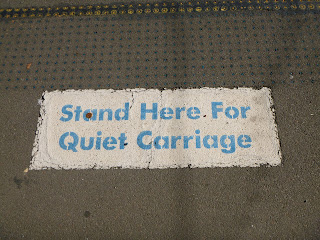 Article via Resident Advisor.
No comments: 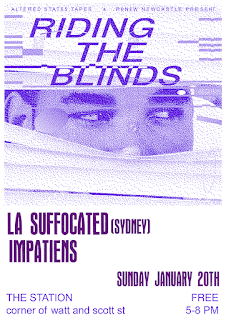 Riding The Blinds is a proposed series of monthly events curated by Newcastle musician, Cooper Bowman, at Renew Newcastle’s unique venue, The Station.

The gigs hope to provide an opportunity for young and emerging Novocastrian artists working with musical forms outside of the traditional guitar, bass and drums arrangement. Each event will feature a local electronic artist and pair them with a complimentary project from Sydney. This is done to both encourage a dialogue between young producers and sound-artists from Newcastle, allowing them to tour if they wish and, similarly, to encourage artists from Sydney (and elsewhere) to play in Newcastle.

Newcastle has a rich history of homegrown music and historically was a regular port of call for Australian touring acts, however this has not been the case for many years, despite the best intentions of initiatives like the 'Live Music Taskforce'. We hope to contribute to Newcastle continuing to produce (and retain) it's musical talent and to make it a viable place for more marginalised cultural activities generally.

Despite touring New Zealand in 2018 and playing regularly in Sydney and Melbourne since forming in 2015, LA are yet to have a tangible release to share. That will change this year when seminal Sydney underground label, Paradise Daily Records, releases their first album.

Impatiens is a recently hatched synth-pop outlet for Amelia Bessany. Bessany’s electronic productions are largely hardware-based with her vocals foregrounded. Impatiens takes queues from folk, experimental and post-punk approaches, crafting vivid scenes that are immediately captivating and firmly stand on their own in the current Newcastle landscape.