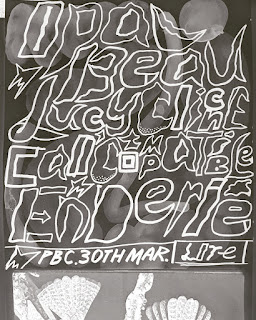 One of my favourite elec musicians (and people generally), Simon Scott aka Opal Beau will be playing his first shows in Australia.

Originally from Melbourne, but now based in Taipei, Simon Scott is one of the more unique producers currently operating. His productions, like himself, are free of any strict geographical pattern-imprinting. Rather, like any of the legitimate forbearers of pioneering electronic music, they are aimed at shifting consciousness to something outside the immediate gaze. There’s an off-kilter nature to some of his beat-placement and woozily psychedelic swirls simmering underneath. Despite the atypical template, Scott still provides a solid grounding on which to shuffle your feet.

Maybe a Newcastle show TBA, possible but unlikely...
No comments: