Troth - 'Nothing Still In The Stone Garden' Short Film.


For the Newcastle Music Festival event held at Watt Space, Besseny and Bowman created an accumulative live performance from within the loops surrounding them, an excerpt of which appears here. The room began the exhibition in silence and slowly sounds, both from the machines and the people working with them, entered until the performance was complete and all that remains is the dialogue between what now moves of it's own volition.

Troth - 'Nothing Still In The Stone Garden' Opening + Performance. 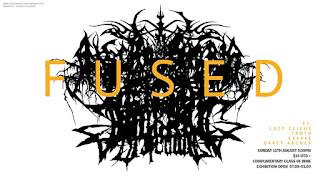 In gallery 1, Amelia Besseny and Cooper Bowman have co-curated an exhibition aiming to pair soundscapes created by first-year students of the University’s music faculty with other creative disciplines from within the University in order to compliment each other’s work and foster dialogue. The audio contributions featured come from Bachelor of Music students Darcy Archer & Ellen Presbury, Dylan Davidson, Jack Watsford and an immersive installation by Dylan Davidson and Campbell McGillivray. Visual accompaniment features from local artists Rachel Klyve, Louisa Magrics and Wednesday Sutherland.

Troth - ‘Nothing Still In The Stone Garden’
'Nothing Still In The Stone Garden' is an installation by Troth as part of ‘Fused’, running for the event’s duration. The work comprises hand-cut reel-to-reel and cassette audio loops paired with a film projection shot in Glen Davis, NSW created by their friend, filmmaker Gregory Perano. Together, the works form a cohesive statement about the awe and inspiration that can be gleaned from time immersed in natural environments, the often-complicated interplay of elements that is found within these zones and the flux that ultimately maintains their vitality.

For the Newcastle Music Festival event being held at Watt Space, Besseny and Bowman will create an accumulative live performance from within the loops surrounding them; the room will begin the exhibition in silence and slowly sounds, both from the machines and the people working with them, will enter until the performance is completed and all that remains is the dialogue between what now moves of it's own volition.

Our essence, to bend and flex
Nothing still in the stone garden
I bind 'round, I fasten


Filmed entirely in Glen Davis in The Gardens of Stone national Park in Northern NSW between Sept 2014 and Jan 2017.
Glen Davis was once a shale mining town whose population high of 2000 in the mining days dwindled to 25 in 2019.


Also, there will be an evening of performances on Sunday.
FB Event

Lucy Cliché (Sydney)
https://soundcloud.com/lucy-cliche
Lucy has carved out a niche of her own bodily contagious techno over her last two decades of practice and is one of Australia's foremost electronic artists. She has performed at the Sydney Opera House, soundtracked films at The Gallery Of Modern Art (Brisbane) and NSW Art Gallery (Sydney), as well as being regularly billed on both dance festivals and DIY shows alike.

Troth
https://soundcloud.com/altered-states-tapes
Troth is a recently-formed Newcastle duo comprising Amelia Besseny and Cooper Bowman. Together they fashion ethereal environs from vocals, electronics, zither, tape loops and sampled percussion and piano. They will be performing in the centre of their film and reel-to-reel installation in Watt Space's Media Room, titled Nothing Still In The Stone Garden.

e4444e
https://soundcloud.com/e4444e
Romy Church is a student of music at UoN and a tireless live performer, gigging regularly both in Newcastle and elsewhere in Australia. As e4444e, Church crafts ornately-structured electronic pop and has revealed himself as one of Newcastle's eminent emerging musicians.

Darcy Archer
Darcy Archer is a student of music at UoN who predominantly works as a percussionist. For this performance, she will be creating a set of meditations via vibraphone. Her collaborative work with Ellen Presbury, The Natural World, is featured in the Fused exhibition in Gallery 1.
No comments: