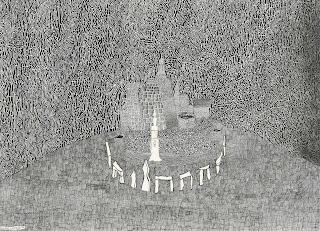 After a 2019 tape on Total Black and another, titled Eating A Tree, earlier this year on AST Newcastle / Sydney duo Tsap finally spawn-forth this long-gestating LP. So far the duo, made up of Chris Colla (Orion, The No, early Low Life, etc) and Cooper Bowman (Altered States Tapes), have played two shows - one in a Sydney bowling club and another inside a former Go-Lo in Newcastle’s mostly-abandoned mall. This goes some way to illuminating what you can expect on Flickering Lyghte In Campsite.

As with their previous output, there is no fencing keeping the two captive and beholden to fickle generic convention. There are bleak, low-BPM techno creepers ‘Operating In The Dark’ and ‘Raising The Carnyx’, approaches to the furthest edges of the minimal-wave continuum in ‘Two Eyes Right’ and ‘Staircase Wit’ and iterations of Pagan House in ‘Faith In Stone’, ‘Indefinite Ancients’ and ‘Gorseddau’.

Altho’ the term is frequently bandied, this is one for the ‘trew heads’. I’m not sure even I completely understand it myself and I make up 50% of the hands that turned these knobs. In a time where much (techno or otherwise) barely reaches beyond the surface level, I can’t think of a better zone to occupy.

Featuring cover art by Nick Blinko reproduced in kind permission by Henry Boxer Gallery. Blinko is one of our favourite ‘outsider’ operators, a member of legendary anarcho agitators, Rudimentary Peni and The Magits.

The album’s back cover and insert images were chiselled by Sydney’s Yuta Matsumura, who we equally respect the output of. 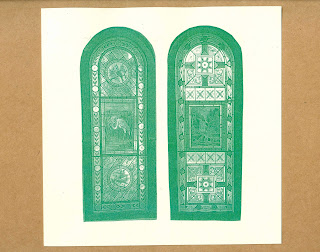 Following sound installations in several galleries and cassette releases on Australian underground mainstays Moontown and Essential Minerals, Flaws In The Glass was recorded by Troth (Amelia Besseny and Cooper Bowman) over a period of a 4-week residency in Mt Wilson, New South Wales in January / February 2020.

Mount Wilson is an idyllic, historic village with no shops and very few permanent residents situated atop the Blue Mountains. In late 2019 and early 2020, the surrounding area (and Mount Wilson itself) were subject to some of the most devastating bushfires ever recorded in Australia.

Troth have turned their established ambient and experimental gaze on this landscape, attempting to authentically convey both the recent, charred tragedy and to celebrate the lush greenery that prevails (and was visibly beginning to re-sprout around them while the album was recorded). They’ve also turned their heads collectively toward experimental folk tracks, in the tradition of its use as a lens through which to view nature.

Many local sounds are used throughout; excited birdlife, creaking campfire steel, an out of tune piano in the village hall, benches on the schoolhouse grounds and the pipe of an incinerator in the studio’s backyard among them. To these, Besseny and Bowman have added zither, various electronics and their voices.

Although not directly referencing anything specific, some listening habits and thematic touchstones during it’s recording were the pastoral serenity of early albums by Cluster, Hans-Joachim Roedelius and Eno + Harmonia’s Tracks and Traces. Polish modern-classical group, Księżyc, and This Mortal Coil both also provided influence via their ethereal takes on folk music and pop composition respectively.

A portion of all sales will be donated to Firesticks (an organisation supporting Indigenous fire maintenance practice and knowledge) and WIRES (animal rehabilitation and conservation in bushfire-effected areas).