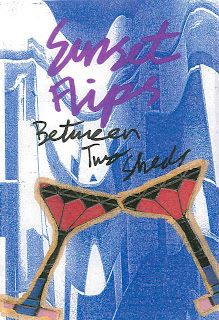 The last time Sunset Flips released a cassette (Jazz Powder and/or Disco Into Dust earlier in the year), I recommended that the punters of AST not necessarily waste their time with it. Alas, several refused to heed my advice and Jazz Powder proved to be the ‘sleeper hit’ of AST’s 2020 first quarter, being met with a polite ripple of enthusiasm. Well, forget all that cause I actually endorse Between Two Sheds, the SF’s closest thing to a ‘considered release’ up to this point in time.

Recorded in two sheds and over a couple of jams on the same Newcastle street in August / September, 2020. We’ve upgraded from the schooners on the cover of Jazz Powder to martini glasses this time, so this should let you know it is a far more sophisticated affair. Two Sheds bears much in common with the spirit of the Breakdance The Dawn school of no-thought (see more below). There is actually something approaching beauty here at times! A surprise to us as much as anyone. The new Sunset Flips setup of piano, electronics, tape loops, sampled percussion and occasional guitar makes up the palette of these eight ditties. Plenty of bumnotes, convincingly purposeful sounding piano improvisations and enough bloody ambience to fill an Aldi bag.

Between Two Sheds on Bandcamp 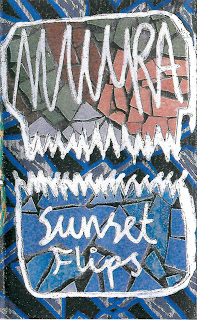 Muura, the rare solo outpourance from esteemed improv-operator Matt Earle. Chairman of the long-running, deeply subterran Breakdance The Dawn label and board-member of such (loose) organisations as xNO BBQx, Sprot, Club Sound Witches, Love Chants and various others. This set (bootlegged by me) occurred at Melbourne record store, Sunshine + Grease in its third (and final) iteration in Clifton Hill on the 11/06/11. Truly life-changing stuff this, one of the best sets my eyes and ears have percepted. It really doesn’t matter that it’s taken me 9 years to shine the light on it, indefinite luster never fades. The recording drops out about 40 seconds shy of the conclusion, but that’s the way she goes. There is also a high-definition video, available on vimeo.com, wherein you can see every pore on Earle’s face, give it a search. This recording is one of the best examples I’ve witnessed of pure sonic alchemy - weaving magic out of the bare minimum - a practice amp, a horizontal busted bass guitar played with a mallet and chopstick (which falls over at one point during the set), a mic and a few pieces of junk’d percussion. Best left not described any further, try for yourself and see what you feel.

Sunset Flips is the Newcastle duo of Michael Liestins (Cock Safari, Mermaids, the Grog Pappy label) and Cooper Bowman (Troth, Tsap, the Altered States Tapes label). We’ve both held a long relationship with Matt Earle, having shared numerous past gigs and peace pipes and, as Sunset Flips, share a similarly loose approach to Soundplay. This was recorded live (in a sense) with an audience of a single cat outside the shed window in Wickham on 20/11/20. Some piano honkin, some loops and devices left to their own devices set amidst a haze of encroaching yuppie development. Try as they may, you can’t bend the weirdos straight.